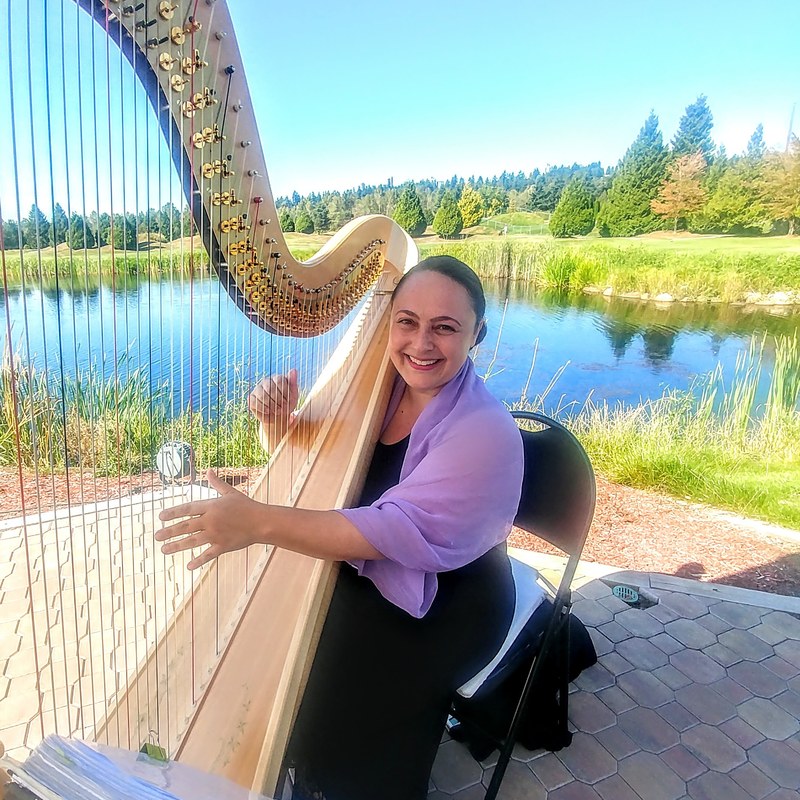 Lani Krantz, a versatile BC based Harpist is a third-generation professional musician with education in many different styles of music. As a teenager in Victoria, BC, she studied harp with Mrs. Taka Kling, was also involved in choir and vocal jazz and was accepted to the BC Honour Choir. She continued her studies in harp performance at UBC with instructor, Elizabeth Volpe-Bligh (Principal Harp, Vancouver Symphony Orchestra), and Orchestral Harp studies at the Aspen School of Music and in Toronto with the National Youth Orchestra. Lani is Principal Harpist with Nanaimo & Vancouver Island Symphony and plays as Principal with the Vancouver Symphony Orchestra. Since 2016, Lani has been a member of the acclaimed touring group Winter Harp, which has just celebrated its 25 year tour. She collaborates with Erhu player, Rong Jun and composer, Jin Zhang. Their music was showcased at the Sound Of Dragon Festival in Vancouver and at the 2011 World Harp Congress. Her duo, Wind n'wire with flutist Carol Dymond, performed the Mozart Flute and Harp Concerto with Lionsgate Sinfonia. Lani recently performed at the Port and Tidemark Theatres, the beautiful and rare Lyra Angelica for solo harp and string orchestra. Lani accompanies singer, Appollonia Vanova on her CD, Lullabies and is heard on the soundtracks for Space Buddies, Super Buddies and at the Canadian attraction Fly over Canada. Lani is an event harpist/vocalist for weddings and corporate events. She is a Harp Instructor at the Vancouver Symphony School of Music. And she has recently added Mom to her list of titles and is excited to start her little boy on his own musical journey!