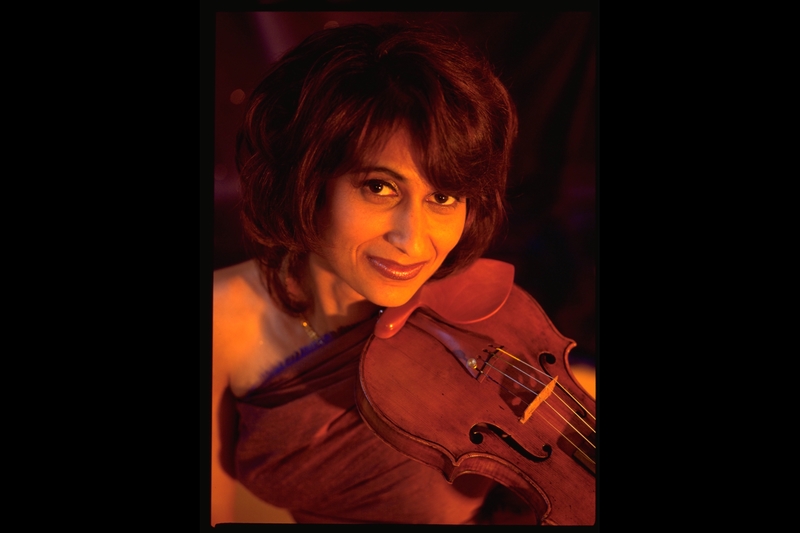 Parmela Attariwala, Ph.D. – Calgary-born violinist/violist, composer and ethnomusicologist – has been described as “one of Canada’s most original and compelling artists”. She traverses genres from Mozart to the avant-garde, from fiddle to rock, from free improvisation to non-Western crossovers with virtuousic fluidity, and is equally comfortable performing acoustically in a concert hall or plugged-in in a club.

Parmela is deeply committed to marrying the discipline of her classical training with an openness to the avant-garde in Western and non-Western arts practices. Intelligent creativity underlies everything she does, whether it is performing composed music, creating or improvising her own music, mentoring young musicians, or undertaking academic researching on the arts in Canada.  Parmela has been particularly influenced by dance—working extensively with choreographers as a composer, musician and movement artist—and by small-scale works for instruments and voices. In 2014 she played violin, viola and crwth (an 11th--century Welsh bowed lute) in the conductor-less opera of Dylan Thomas’ “Under Milk Wood” composed by John Metcalfe, an opera nominated by the International Opera Awards in the World Premier category for 2014.

Parmela has released three critically acclaimed recordings that defy the boundaries of genre: Beauty Enthralled(1997), featuring tabla player Ravi Naimpally and ghazal singer Kiran Ahluwalia; Sapphire Skies (2003), which features her own compositions and improvisations performed with James Campbell, the Penderecki Quartet and Ed Hanley; and The Road Ahead … (2010), a collection of commissioned Canadian works for violin and tabla, performed with Montreal-based tabla player, Shawn Mativetsky.

As an academic, Parmela has researched and written about: social justice, democracy and Canadian arts; improvisation in classical Western music pedagogy; and medieval North Indian devotional poetry and music.
Following twenty-five years as a Toronto-based freelance musician, Parmela moved to Vancouver in 2019.