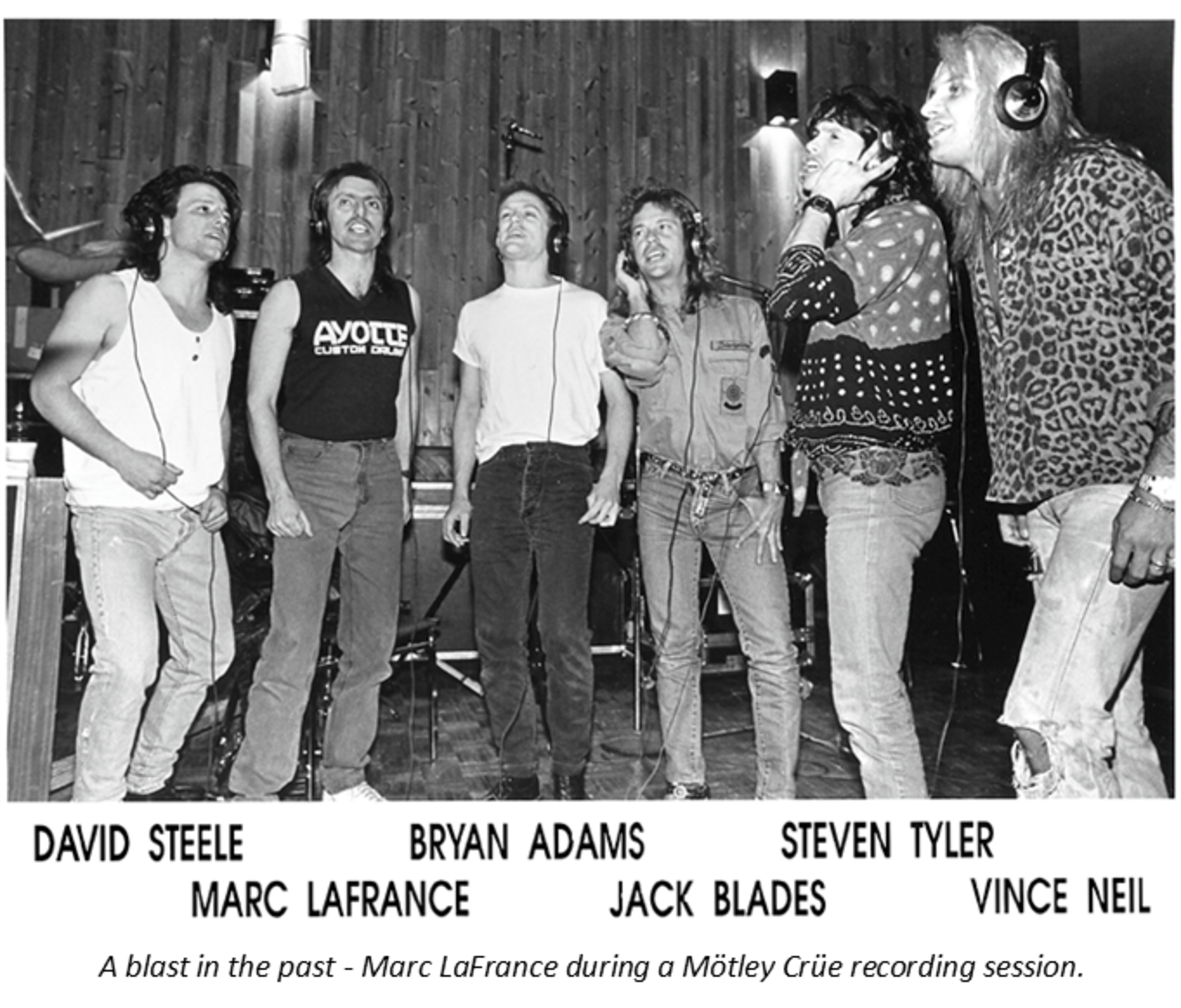 With over 40 years experience in the music industry, VMA Life Member Marc LaFrance boasts an impressive musical résumé. Aside from touring with his bands Cease and Desist and Atlantic Crossing, as well as with Randy Bachman, Marc has also done a considerable amount of recording work as a drummer and singer. In this interview, Marc talks about his experience working under the Sound Recording Labor Agreement (SRLA), how he continues to benefit from recordings he did decades ago, and how he ended up doing backup vocals for big name artists such as Bon Jovi, Loverboy, Cher and Mötley Crüe.

How did you learn about the SRLA?

I knew about the SRLA through my involvement with the musicians union. I was a member of the VMA Executive Board from 1993 to 1998. But before I moved to Vancouver, I was with the Winnipeg local, where I did a fair amount of session work on a variety of jingles.  I also knew some of the local musicians who did a lot of union gigs through CBC.  Through all that, I had a pretty good knowledge of the musicians union and what it offered.

What motivated you to start filing contracts through the union for recording work you've done?

I knew that if I filed my contracts properly, there would be re-use fees if my work got used elsewhere. When I moved to Vancouver and started doing some of the bigger work (i.e. with Mötley Crüe), every time I did those sessions, I tried my hardest to make sure that they were filed properly through the union.

Plus, at the time, I heard there were rumblings that Canada was starting to talk about getting involved with the WTO Agreement. I was part of a special committee set up by the musicians union that went to Ottawa to represent the working musicians and ensure that not only the main artists, but the side artists as well, benefited from neighbouring rights. So, I knew that the smart thing to do was to have a third party, like the musicians’ union, to make sure that stuff is filed, so that you really have proof that you were actually on that recording.

What sort of media have some of the recording work you’ve filed through the union been featured in?

A lot of the recordings I’ve worked on have been featured on major motion pictures & television shows, commercials and video games.  “Kickstart my Heart” is an example, as that song as has been used on numerous occasions, such as the Netflix movie “The Dirt” that they released last year.  A few of the Mötley Crüe tracks that I sang on ended up being used in a Rock Band video game.  “Kickstart my Heart” has also been used in 2 different Super Bowl commercials for Planters nuts and Kia.  There was also the Loverboy song, “Lovin’ Every Minute of It,” that was featured in a car rental commercial somewhat recently and “Back to Paradise” performed by 38 Special, was featured in the soundtrack for Revenge of the Nerds II.

How has working under the SRLA impacted you as a musician?

It has been huge for me. It is like my retirement fund. I have probably worked on over 100 records and filed as many as I could through the union. Just doing that paperwork correctly gives you longevity in your career, and you continue making money off things you did years ago.   There is so many different revenue streams. Aside from the re-use fees, there's also royalties from the AFM & SAG-AFTRA Fund, also the Film Musicians Secondary Markets Fund, which increases every year because the number of songs build up.

Looking back at all the recording work you have done, is there any particular moment that really stood out to you?

When I moved to Vancouver, I had a meeting with Brian Griffiths from GGRP Sound. From there, I started to do jingles at Little Mountain Sound Studios as a background singer, and some drum sessions as well. At that time, Bryan Adams was doing jingles, so we were singing commercials together. Then Loverboy recorded an album, which led to this explosion. For the next 15 years, all these bands and artists were coming from all over the world to record at that studio with these great producers, and I just happened to be one of the guys that they liked to use as a background singer. It really was a magical time.

For those who are interested in doing sound recordings under union contracts, what advice would you give them?

You have to learn your industry and understand the business side of it – how record companies, publishing, neighbouring rights, etc. work. If you think about it, we're self-employed business people. A key thing to also remember is that you have to be diligent. I joke with people often that part of my job is watching movies. I will watch movies and go on the internet to search if a song is being re-used, because if you don't catch it and report it to the union, you won't get your money. You have to continuously be active and keep on top of what your catalogue is doing.